I recently shared [what some might say is] a controversial post by a very concerned parent, her story/experience of bullying in Amador County schools and the leadership that did nothing to stop it. It was posted in a general public Facebook group "Amador County School's Community Forum". ACN is a part of several public Facebook groups and pages, and this is one post that caught my eye. Bullying is a subject I always feel is important to share and discuss.

How quickly the subject turned from the issue of bullying in schools, to pointing the fingers at ACN (me) for being "one-sided". A long comment thread ensued, and I did my best to point out that ACN is a community media (not corporate) platform, that all have a voice and are welcome to comment on its posts, as long as they're not abusive or degrading. One commenter claimed that the reason why she "doesn't follow ACN anymore...(but somehow she was able to jump right into the conversation?)....was because of its "weak standards".

I happen to think it was a rather ballsy move to share something as crucial as an Amador County parent's first-hand account of bullying in schools, and her frustrations with the system. Where so many parents are silent or apathetic about the issue...or fearful of sharing their own experiences and stories because of possible social repercussions...Mrs. Arevalo took an "enough is enough"-type of stand, which I believe isn't weak, but quite powerful and obviously more effective than the continued status quo and brush-off by said powers that be. I support those who will stand up and be a voice when no one else, or very few, will.

In my continued effort for ACN to truly be a balanced, unbiased, non-partisan, politically neutral, First Amendment-type platform where everyone has a voice and a soapbox to stand on, it has never been an easy task. In the last 12 years, I've had plenty of indignant, snide remarks on both sides of the political spectrum - liberal and conservative. I've interviewed folks to get their side of the story, and then they get mad at me for interviewing the other side, and call me "biased". Both the Amador Republicans and Mother Lode Democrats of Amador are Supporting Advertisers of ACN, and have been for many years. But when I share their events or meeting notices, it never fails that I get either angry or laughter emojis, or comments that sneer at one side or the other.

On November 19, 2019 I posted a meeting notice from the Mother Lode Democrats of Amador. Their guest speaker was Cynthia Shallit with Moms Demand Action for Gun Sense in America". Because I've been getting so much flack from the left and right, I've had to post the following disclaimer in the comments: Amador Community News is a non-partisan, politically neutral community media news blog, and does not endorse any political parties or candidates.

This was the response (note the emoji reactions...a typical reaction on such posts of this nature): 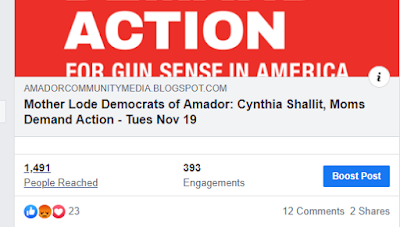 Perhaps the most irritating comment to my disclaimer on this post was: "Heaven's no. Standing for nothing is much safer." Now, it so happens that I know the person who posted this comment, and quite frankly, I was insulted. Ironically, this person is related to a very dear friend of mine (now passed away) who is the very reason Amador Community News still exists today: Kay Pulskamp. I made a promise to her that I would never stop ACN. "Amador County needs you," she said.

To add insult to irritation, I have always shared many of this person's posts (often for free) for their farm, their restaurant, even his own events and causes, etc. I have even personally shown up for some of his events when very few did. So to say that I "stand for nothing" is not only untrue, it felt like a slap in the face. Talk about biting the hand that helps you.

It's not the first time I've been accused of being apathetic or a "fence-dweller", and I don't care. I will continue to be non-partisan, and just because I don't lean left or right doesn't mean I stand for nothing. I might not necessarily agree, but that's not for me to decide when running an unbiased  community news blog. This is America; we the People have the freedom of speech and the press. If I just published those who send liberal content, would that be balanced? If I just published Republican meeting notices, would that be an unbiased press?

There are not just two sides of a story; there are several sides...and thousands upon thousands of opinions. I have found it fascinating that there are so many who have absolutely no problem believing and spreading gossip and fake news to infinity and beyond on social media and other sites, as long as it fits within, supports or validates their agenda, persuades others to climb on their bandwagon, or increase their base. But there are also those of us [moderates] who are fed up with the division, the bickering, the back and forth...the taunting, the teasing, the bullying.

My years in community media have taught me a lot. I think back and wonder about all of the newspapers in the world where thousands...millions...of articles or Letters to the Editor have never seen the light of day, all to preserve the status quo..."the man behind the curtain"...keep those advertisers or those "good ol' boys" happy. Now, social media has given a voice to everyone, not just a select few. I can't tell you how many times folks have come to me and said, "The paper won't publish my letter," and I would respond, "I will. Shoot me an e-mail."

Sometimes, I like to meditate myself back into a different time in human history, like...The Crusades. The Spanish Inquisition, Slavery and the Civil War. The Trail of Tears. The Boston Tea Party. The Salem Witch Trials. World War II. Vietnam. Whose "side" would I be on? Would I be silent and do nothing? Would I get a torch and pitchfork and join the throngs?

Every time I go down these timelines, I come to the conclusion that I would, quite honestly, be afraid. In fact, I would be very afraid of the powers that be. But I would not be someone who did nothing! I would most definitely help Harriet Tubman with her Underground Railroad. I would hide Jewish families in my home. I would throw tea into the Boston harbor. And well, since I'm part Native American, the battle goes on and is still very real. I know, full well, that if I got caught doing covert, humanitarian operations back then, I would most likely end up in prison or dead. So yes, I'd probably live in fear...but those fears would never prevent me taking the risks associated in doing the right thing when others are being wronged...or prevent others from standing up for what is right...or stifle the voices of truth and justice.

So, you know what? There are worse things than folks disparaging ACN on Facebook. Like bullies in our schools...or parents and schools who don't teach their children to be good citizens...or folks who don't stand up for others when they're being bullied.

Be good. Be nice. Be strong.

UPDATE: While the original post in the Amador County School's Community Forum has been taken down (and for good reason)...I just want ACN's readers to know and understand that my intent in sharing the original post was to bring up the subject of bullying in the schools...which we all know leads to school shootings, suicides, etc. Though I've received a lot of backlash, the good that has come out of this is that bullying in the schools of Amador County is back on the discussion table again.
What we are teaching our children about bullying and abuse, both at home and at school...not just in Amador County, but all over the world...ISN'T WORKING. Schools and organizations cannot just haphazardly throw together a "program" and hope that the message will get through. That's like throwing spaghetti against a wall and seeing if it will stick.
Parents, teachers and the leaders in our communities need to be PROactive in changing the direction of violence in homes, schools and the workplace. It starts in the home...it is fostered in our schools and communities. Abuse in ANY form is unacceptable, and it is time that we quit sweeping the issue under the rug.
I want to thank Operation Care, First 5 Amador and the Amador Child Abuse Prevention Council for their continued, loyal support of Amador Community News, and hopefully, all of this will mean something to the communities of Amador County, and good will prevail.

Posted by Carol Harper, Community Media at 11:44 AM