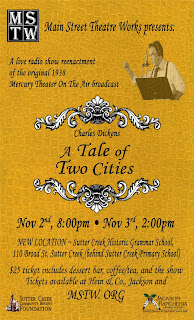 JACKSON, CA - The finest radio dramas of the late 1930’s were presented by The Mercury Theater On The Air, founded by Orson Welles and John Houseman. Together, they presented many classic pieces of literature, and shook the country with it’s terrifying staging of “War of the Worlds.” Main Street Theatre Works (MSTW) is re-creating one of these literary classic radio plays, A Tale of Two Cities, complete with live sound effects.

This limited-engagement fundraiser will have only two performances ~ Saturday, November 2 at 8:00pm, and Sunday, November 3 at 2pm. Performances will be at our new location, The Historic Sutter Creek Grammar School, 110 Broad Street, Sutter Creek. Tickets are $25 and include a dessert bar, coffee or tea, and the show. A no-host wine bar will be available on a donation basis.

MSTW Company Member Allen Pontes has produced, directed and starred as Mr. Welles in the past eight productions ~ The War of the Worlds (2 years in a row), Dracula, Treasure Island, The Count of Monte Cristo, The Immortal Sherlock Holmes, Around the World in 80 Days and The 39 Steps. The show adheres to the same time constraints (60 minutes), same script, and live sound effects, just the way Orson would want it. It’s a fun flashback to the days when people “watched” their radios, and sound effects were done live. Other cast members include Scott Adams, Julie Anchor, Jason Kaye, Vincent Keene, and Richard Williams, who share the duty of portraying the more than 36 different characters and producing lots of live sound effects.

Also, as part of the fundraising efforts, MSTW will be holding a silent auction, with lots of great items to bid on, including a beautiful condo at the Lake Tahoe Vacation Resort, on the lake at the corner of Ski Run Blvd and Hwy 50. The condo has one bedroom and a full kitchen, and access to a variety of amenities including a pool, Jacuzzi, sauna, full bar, restaurant and more. Accommodations are for two nights, Sunday through Thursday. You can bid on this, and other great items at both A Tale of Two Cities performances, and bidders need not be present to win. All proceeds from this event benefit Main Street Theatre Works, a 501C3 theatre company performing in Amandor County for 25 years.

Join us for this special event and see how the magic is really made, while supporting Main Street Theatre Works. Seating is limited, so get your tickets early.


Posted by Carol Harper, Community Media at 6:04 AM