JACKSON, CA - This year, Main Street Theatre Works (MSTW) celebrates 25 years of producing theatre in Amador County. And this is their 16th year at the Kennedy Mine Amphitheatre in Jackson. They kicked off their 2019 Summer Season with the very funny Leading Ladies, and now present their second summer show, Alone Together, directed by Susan McCandless.

Alone Together was written in 1983 by Lawrence Roman who, 20 years prior wrote the comedy hit, Under the Yum Yum Tree, which became a successful film staring Jack Lemmon. It is a heartfelt comedy for those parents who understand what it means to have "boomerang kids."

After 30 years of child rearing, George (Allen Pontes) & Helene Butler (Julie Anchor) are practically drooling with anticipation as their youngest son, Keith (Conner Ohlrich), drives off to start college. But dreams of carefree days and passion-filled nights are quickly dashed when eldest son Michael (Jason Kaye), followed by middle sibling Elliott (Eric Fawcett), take up residence in the bedrooms of their youth. Now mom and dad have to figure out how to push the birdies back out of the nest. Also in the cast is Rian Lombardo as the surprise guest, Janie.

Tickets available at the gate, Hein & Company in Jackson,
or on-line at
www.mstw.org 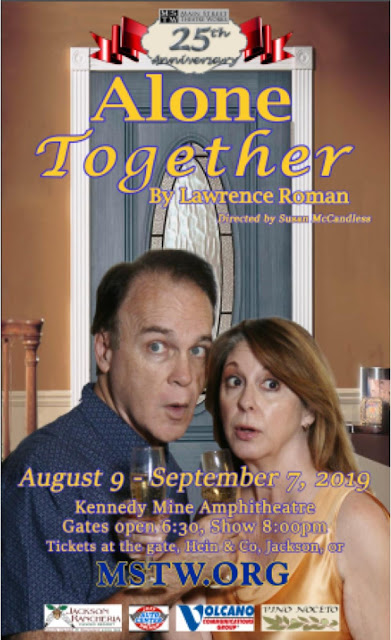 Posted by Carol Harper, Community Media at 5:31 AM